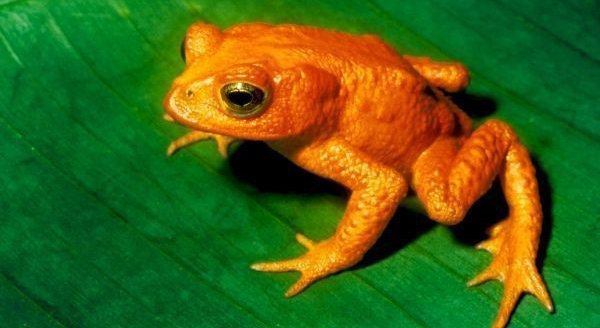 In northwest Costa Rica Monteverde rises, with its famous cloud forest. In this damp, cool mountain forest in 1966 a little frog that shimmered orange-gold was discovered, the “Sapo Dorado” (incilius periglenes). The cute little guy became famous on account of his colour and was portrayed in the “National Geographic”; this contributed to the development of Monteverde for tourists. There is even a hotel named after him.

The Sapo Dorado is very reclusive and can really only be observed during the mating season, when at the beginning of the rainy period large numbers gather around the ponds. They lay their spawn in these puddles, from which later tadpoles emerge.

Into the 80s a great deal of forest was cut down in Costa Rica, to make room for cattle pastures. The German film “Jungle Burgers” documented this convincingly at the time.

As a result many ponds dried out before the tadpoles could change into frogs. Soon fewer and fewer specimens could be found and since 1989 no more have been seen. The “Sapo Dorado” is the first victim of global warming.